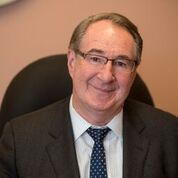 Denis E. O’Donnell, MB, BCh., (NUI), MD (NUI), FRCP(I), FRCP(C) is a Professor of Medicine, with cross appointments to the Departments of Biomedical & Molecular Sciences (Physiology), Rehabilitation Medicine and Kinesiology & Health Studies, Queen’s University, Kingston, Ontario, Canada.  He is a Clinician Scientist and past Chair of the Division of Respiratory and Critical Care Medicine and Director of the Respiratory Investigation Unit at Queen’s.  He completed clinical research fellowships in Respirology at TrinityCollege, Dublin, and at the University of Manitoba (1984-1988), where he completed a doctoral thesis in medicine on the topic “Mechanisms of Dyspnea in COPD” in 1988.  Dr. O’Donnell’s main research focus is clinical integrative physiology and specifically, exercise pathophysiology and mechanisms and management of dyspnea in respiratory disorders.  His main clinical focus is COPD and pulmonary rehabilitation.

Dr. O’Donnell had a leadership role (Chair) in the development of best practice guidelines for the management of COPD in Canada.  He has been a senior author in over 260 scientific publications.  He has co-edited a book on Dyspnea, now in its third edition.  He has lectured extensively on these topics both at a national and international level.

He has been the recipient of the Basmajian award for Excellence in Biomedical research at Queen’s University.  He held a Career Scientist Award from the Ontario Ministry of Health from 1994 to 2004.  He gave the American College of Chest Physicians Distinguished Scientist Honour Lecture in 2005, the Trudeau Lecture for the New York Thoracic Society in 2007, the Jean Jacques Gauthier Award and Honour Lecture, University of Montreal and the John Rankin Visiting Professor and Honour Lecture, University of Madison, Wisconsin in 2008.  In 2012 he received an award for Excellence in Research in Respiratory Physiology by the Association for Respiratory Technology & Physiology (ARTP) in the United Kingdom.