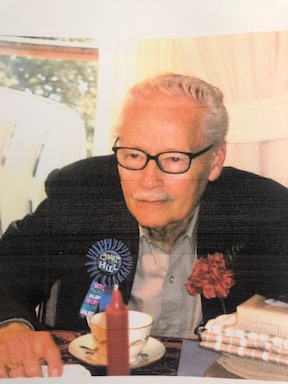 Mr. Carl E. Jones was an independent mentally and physically active man until his 76th year, when he developed a fine tremor in his right hand, his mental acuity slackened and he suffered bilateral retinal detachments.

Carl first became acquainted with the Neurology team at Kingston Health Sciences Centre in the spring of 2018 when he presented to the Emergency Department, having suffered involuntary falls and other symptoms of an acute stroke.  Fortunately, the stroke symptoms improved quickly, but in the process it became apparent that Parkinson's Disease distressingly impaired his quality of life. Carl was grateful for the thorough investigation while in the Stroke Unit and his referral to Dr. Stuart Reid.

With appropriate medical care and rehabilitation supports, he regained some small measures of independence, such as rising from a chair and getting into and out of a car without assistance.

At each Clinic visit Mr. Jones spoke highly of the comprehensive care he'd received while a patient at KGH. He was appreciative of how recognizing and treating Parkinson's Disease can restore some degree of independence.

Carl unfortunately died on Oct 3, 2019 at 81 years of age.  In appreciation of his care, his sister Marilyn made a generous gift on Carl's behalf, to further research into the causes of Parkinson's Disease.

This donation recognizes the care from Dr. Stuart Reid and contributes to the ongoing investigations into the modulation of control of movement by deep brain stimulation and to the improvement of the quality of patient care in our region.