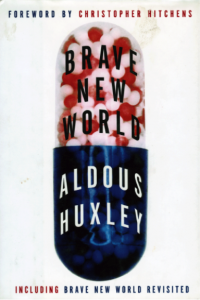 "..there is always soma, delicious soma, half a gramme for a half-holiday, a gramme for a week-end, two grammes for a trip to the gorgeous East, three for a dark eternity on the moon..." A. Huxley 1932

"To his dog, every man is Napoleon; hence the constant popularity of dogs."  Aldous Huxley

In Aldous Huxley’s Brave New World, citizens are trapped in their chemically induced happiness, rendered docile and complaint with the state, by a drug called soma. It’s a great read, but don’t mix BNW with Margaret Atwood or alcohol as you may become horribly discouraged. Canada is not the dystopian state that Huxley envisioned existing in London in 2450 AD, but a recent Medical Mortality Rounds by Dr. Stephen Vanner, Deputy head of

Medicine (left) on narcotic over-prescription in Canada did give me a flash-forward to Huxley’s world.

Dr. Vanner raised a challenging question: are we physicians too freely prescribing narcotics and doing so at doses that are dangerous?

This two-part question does not imply that patients want to be drug addicts or that physicians are negligent or cynical. Rather, it acknowledges both our biology and our nature as humans. Our brains have opioid receptors and we are hardwired to ‘appreciate’ narcotics. Moreover, in life there is pain and it calls out for relief. It is perceived by some physicians as being easier to end a pain-related medical encounter with a prescription than to deal with often complex socioeconomic and psychosocial issues that underlay pain and the patient’s response to pain. Dr. Vanner’s premise to be explored is that physicians are overprescribing powerful and addictive narcotics to patients who are or who will become addicted, and receive little benefit from their medicine.

The Case: The case that inspired the round was one of a patient with chronic abdominal pain; real pain due to real gastrointestinal disease. Over the years, the analgesic regimen evolved. Tylenol 3s gave way to Percocet and, when the pain continued, more powerful opiates took the stage in escalating doses. Eventually the patient was receiving high dose fentanyl patches, Percocet, a benzodiazepine and hydromorphone every three hours. Despite this, the patient continued to complain of pain (even though often they had to be roused from sleep to raise the complaint). The patient became withdrawn and isolated from the surrounding world. Dr. Vanner’s review suggested that this patient really did not benefit and may have suffered from good intentioned efforts to alleviate her pain. The Approach: The solution to a patient in chronic pain who was trapped in hospital ultimately came form calling in a pain specialist, Dr. Scott Duggan, from the Department of Anesthesiology and Perioperative Medicine. Dr. Duggan began the complex pharmacologic and psychological task of rationalizing and reducing her pain regimen. This involved transitioning the patient to suboxone (buprenorphine + naloxone) to reduce the addictive nature of her regimen and finally, transitioning to methadone. This sedated, bed-ridden patient ultimately became alert and well enough to leave hospital.

Dr. Gerald Evans, Chair of the Infectious Disease Division (right) and former Chair of the Ontario Ministry of Health’s Committee to Evaluate Drugs presented data, based on publications from colleagues at the Institute for Clinical Evaluative Sciences (ICES). Here is what the data shows:

Figure 1: A rise in the use of opioids in general and a shift away from arguably less potent forms, such as codeine, to more potent and addictive forms, such as oxycodone.

Dhalla I et al, Prescribing of opioid analgesics and related mortality before and after the introduction of long-acting oxycodone. CMAJ. 2009. 181(12):891-6.

We are not only using opioids more often but we are giving patients higher doses which increases the likelihood of harm, as shown in Figure 2. Figure 2: Proportion of Ontarians receiving opioids that receive >200mg of morphine (or equivalent) daily

You might argue physicians are just being compassionate and relieving pain and no harm is done. But in fact, according to ICES data, as summarized by Dr. Evans, harm is done. There is a direct relationship between our rate of opioid prescriptions and mortality, even after adjusting for predictors of adverse outcomes, such as age. This was a surprise to me, and I suspect to many colleagues.

At the doses used by this patient (expressed as equivalents of morphine dose, i.e. 200mg of morphine/day), Gomes et al showed a tripling of mortality rate (Figure 3)

In fact, Dhalla et al showed that simply adding a more potent and addictive narcotic (OxyContin) to the formulary increases the risk of death (Figure 4)

Gomes has used the ICES database to further refine the understanding of our narcotic overuse and propose solutions. They discovered that older male, physicians who have been longer in practice are overrepresented amongst narcotic prescribers (Table 1):

Physicians and the public need to be skeptical about industry claims of safety. The hype around narcotics and their safety often exceeds reality, as the makers of Oxycontin discovered. Our patient did not have a better life or pain relief from the narcotic, and it came to complicate her management, making it hard to assess her underlying disease. She had become addicted, sedated and bed-bound. While we should not withhold narcotics in the terminal stages of life as part of a palliative regimen, nor for acute injury, they should be used judiciously at the lowest effective dose. Drs. Vanner, Evans and Duggan’s message was that physicians need to think more carefully before prescribing narcotics (other than for acute pain or in planned palliative regimens). Several solutions to this problem were presented and I pass them on to you for your consideration: The Solutions: The takeaway solutions are awareness, early consultation of pain specialists and better electronic tracking of narcotic prescriptions to inform physicians of patients who may be doctor shopping to amass narcotics. In addition, the CPSO offers a Safe Opioid Prescribing course to educate physicians in hopes of reducing prescription use.

-- Somewhere in my medical training I was exposed to a quote that goes something like this: Pain has the remarkable property that if severe, it cannot be prolonged and if prolonged, it cannot be severe.