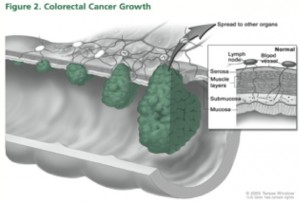 Preventing colon cancer: it’s not that hard a pill to swallow

If people are constantly falling off a cliff, you could place ambulances under the cliff or build a fence on the top of the cliff. We are placing all too many ambulances under the cliff. …Dr. Dennis Burkitt, the Irish surgeon and researcher who discovered Burkitt’s lymphoma (28 Feb 1911 - 23 Mar 1993) News Flash! Colon cancer is largely curable (if detected in its early stages).  However, advanced disease can be lethal. Colon Cancer Canada estimates that each week 423 Canadians are diagnosed with colon cancer and 175 die of this disease. Making the case for screening even more compelling, 1/14 men and 1/15 women are expected to develop colon cancer over their lifetime. In the United States, it is recommended that adults over 50 have a screening colonoscopy to detect the early stages of this disease (which often start as a polyp which can be removed noninvasively-see Figure). Screening colonoscopy is effective, but not very scalable (it is expensive and there is often reluctance on the part of healthy subjects to engage in this preventative test). In Canada a cheaper, less intrusive screening strategy is advocated, screening for fecal occult blood; however, this simple test is only 30-40% as sensitive as a colonoscopy. http://www.cancer.org/acs/groups/content/@epidemiologysurveilance/documents/document/acspc-028323.pdf

Figure: progression of colon cancer So let me ask you a question (assuming you are over 50 years of age), “ Would you prevent cancer by undergoing a screening test?”. Certainly you say?  What if that test involved flushing your colon overnight and then having a flexible tube passed into your colon while under sedation? ….not so sure?  You are not alone, although screening colonoscopy does save lives, it is expensive and approached by most healthy 50 year olds with trepidation.  There are now several alternatives that give much of the benefit of screening colonoscopy without the tube and sedation….and these techniques are being perfected here at Queen’s University.

Dr. Lawrence Hookey, a talented gastroenterologist and Associate Professor in the Division of Gastroenterology, based at the Hotel Dieu Hospital, Lawrence and his colleagues are testing a new way of screening for colon cancer that is less intrusive than colonoscopy but provides a similar direct visual inspection of the entire bowel. As with colonoscopy patients have to undergo a “prep”, to clean the bowel but then, instead of having a colonoscopy, they swallow a capsule (the size of a large vitamin pill-see image). The pill with its internal camera travels through the intestine in roughly 10 hours transmitting pictures to a small portable receiver that the patient wears (see link http://www.ckwstv.com/news/kingston/Story.aspx?ID=1832645).

Figure: Colon capsule As Dr. Hookey notes the capsule has promise. In a recent multicenter, European trial such a colon capsule endoscopy system was almost as good as colonoscopy. It had high sensitivity (84%) and fair specificity (64%) (Gastrointest Endosc 2011;74:581-9.). Importantly all colon cancers were detected during the 10 hours it took for the capsule to pass. If the capsule is not your speed, consider CT colonoscopy. This technique also requires the colonoscopy preparation but no pill is swallowed and no probe is passed. This image, provided by Dr. Brian Archer, Department of Radiology, Saint John Regional Hospital (Queen’s Meds’88) shows a colon cancer. CT colonoscopy is noninvasive and nearly as sensitive as colonoscopy.

Figure: CT colonoscopy Canadians now have a choice…occult blood testing, CT colonoscopy, and regular colonoscopy…and courtesy of the research by Dr. Hookey in the Division of Gastroenterology, (led by Dr. Bill Patterson), there is the emerging possibility of capsule colonoscopy. So whatever your preference, follow Dr. Burkitt's advice and make sure you get screened. We don’t want to have to send an ambulance to pick you up at the bottom of the cliff.