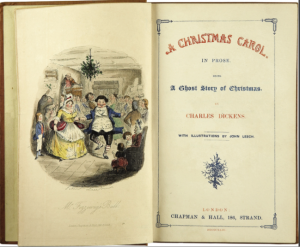 Who is Mr. Fezziwig: A Carol for Queen’s University Department of Medicine Upon the Eve of Our Holiday Party 2014

Who is Mr. Fezziwig: A Carol for Queen’s University Department of Medicine Upon the Eve of Our Holiday Party 2014 Jorkin: "Mr. Fezziwig, we’re good friends besides good men of business. We’re men of vision and progress. Why don’t you sell out while the going’s good? You’ll never get a better offer. It’s the age of the machine, and the factory, and the vested interests. We small traders are ancient history, Mr. Fezziwig.”  Fezziwig: “It’s not just for money alone that one spends a lifetime building up a business…. It’s to preserve a way of life that one knew and loved. No, I can’t see my way to selling out to the new vested interests, Mr. Jorkin. I’ll have to be loyal to the old ways and die out with them if needs Scrooge: “I think I know what Mr. Fezziwig means, sir.” Jorkin: “Oh, you hate progress and money, too, do you?”  Scrooge: “ I don't hate them, sir, but perhaps the machines aren’t such a good thing for mankind, after all.” Scrooge: “Money isn’t everything, sir.” Memorable characters abound in Charles Dicken’s, A Christmas Carol. Everyone knows Tiny Tim, Bob Cratchet and the Ghosts of Christmas Past, Present and Future. A Christmas Carol has enduring impact because it is a story that all can identify with (humans are flawed but can be redeemed). Whether you are a child, a person of faith or a secular humanist the message, that a second chance is possible, resonates. And who is the subject in need of redemption? Why Ebenezer Scrooge, businessman, cynic and miser.

One may be forgiven for coming away from reading the Christmas Carol with the thought that all humbugs like Scrooge would benefit from a gaggle of ghouls who could redeem them through sequential administration of nostalgia, shame and terror. Perhaps you know a scrooge whose miserly ways, ill-temper or general cynicism cries out for such intervention? Maybe you have wished you could conjure them a “Spirit” that would scare them out of whatever personality disorder they suffer from. However, when it comes to diseases, whether it’s the mumps or the twisting of people’s souls, therapy is never as effective as prevention….and that brings me to Fezziwig.

Who, you ask, is Mr. Fezziwig?

I queried several colleagues to identify the man and yet they could not, even when prompted with the context of the Christmas Carol. That deficiency calls out for correction both because I hope for a better position for Mr Fezziwig in the pantheon of Dicken’s literary characters and because Mr. Fezziwig (or rather his absence) explains much of what transpired with Ebenezer Scrooge. Ebenezer began, like all of us, as a good child. You may recall there was a time when Ebenezer was young and happy. He had family issues that amplified a need for success and his predisposition to isolation. However, he had a girl he loved and a sister he cared for. He worked at a job he loved and his boss was..well you guessed it, Mr Fezziwig. Mr Fezziwig worked to live and loved his work (but was not controlled by it). He cared for his workers and ensured they spent time in play and that they celebrated as a family. Read the dialogue at the beginning of the blog, clearly young Mr. Scrooge was no miser! Oddly in light of his ultimate evolution to a workaholic miser, what kept young Scrooge balanced was his workplace and specifically his boss. As Mr. Fezziwig’s gravitational field weakened, Scrooge was pulled ever more to the pursuit of money. Without balance he soon lost all the human contact he valued, and ultimately lost himself. In the end, Mr Jorkin performed a successful hostile takeover and his managers (Mr Marley and Mr. Scrooge) acquired the shop..and the rest is history. I am writing this blog on the Eve of the Department of Medicine’s Holiday Party and Awards Ceremony. This is a night when we honour the work of the faculty and share time with the residents. We eat, drink and make Merry. This is a night for each of us to channel our inner-Fezziwig. Perhaps you remain skeptical about the importance of Mr. Fezziwig (although surely I have convinced you he stands for compassion, for treading lightly on people, for respecting those who work with you and especially those who work for you). Should you remain in doubt about the importance of Mr Fezziwig amongst all the fine characters that Mr Dickens conjured, regard Exhibit A: The fronstpiece from the 1843 first edition of A Christmas Carol. What scene greets us? Its Mr and Mrs. Fezziwig at the ball they held for their workers! So pick up a glass of cheer and celebrate the season with a co-worker and thank them for their work. I thank you for all you have done to make the Department of Medicine a place that I am proud to call home.