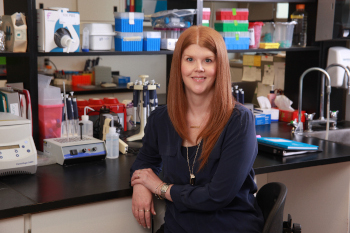 On March 27th, the Translational Medicine graduate program had the pleasure of hearing from Dr. Paula James, a clinician-scientist and world-renowned expert in inherited bleeding disorders from Queen’s University. Dr. James’ presentation focused on the problems facing women with bleeding disorders and the importance of knowledge translation to the general public.

Dr. James began by highlighting that menorrhagia, heavy menstrual bleeding, is a population health problem. She explained that 30% of women report heavy menstrual bleeding at one time during their reproductive years, half of whom objectively have menorrhagia; however, only 5-10% seek medical attention. In particular, for approximately 15% of women, the cause of their heavy menstrual bleeding is an inherited bleeding disorder1. Unfortunately, menorrhagia can negatively impact quality of life as women can be forced to miss school/work, can decide to have a hysterectomy, and can suffer from iron-deficient anemia2. These women suffer despite having a very treatable problem. What’s more, is that there can be a lag of up to 15 years from when women start having symptoms to when they receive a diagnosis.

In Canada, there are tens of thousands of people living with undiagnosed bleeding disorders3, the majority of whom Dr. James believes are women. She explained that the barriers to diagnosis are responsible for this high number, especially for women. The diagnosis requires difficult lab testing; however, the most significant barrier to diagnosis for women is a lack of understanding about what normal bleeding is and what abnormal bleeding is, especially with regards to menstrual and postpartum bleeding. Another barrier women face is the social stigma associated with menstrual and postpartum bleeding, such that women feel uncomfortable discussing these topics.

In the clinic, physicians use Bleeding Assessment Tools (BATs) to take a standardized bleeding history, objectively evaluate a patient’s symptoms, and prevent abnormal symptoms from being overlooked. In 2013, Dr. James and her team developed and validated the selfadministered BAT which, allows patients to complete the screening tool themselves in 5 to 10 minutes.

To reach the general public, make the self-BAT widely available, and see the full knowledge translation of this screening tool, Dr. James developed the Let’s Talk Period project. The Let’s Talk Period initiative uses a website (https://letstalkperiod.ca/) and social media platforms (Instagram and Facebook) to inform the public about bleeding disorders and potentially bring awareness to people who have an undiagnosed bleeding disorder through completion of the self-BAT. In order to build the Let’s Talk Period project’s online presence, Dr. James consulted with social media, knowledge translation, and legal experts, as well as used focus groups to garner feedback. Overall, the Let’s Talk Period brand is inclusive and has a clear voice, is freely available, ensures anonymity, and has continued to grow.

Dr. James shared that since the launch in May 2016, the website has been viewed over 150 000 times in almost 200 countries and over 17 000 self-BATs have been completed. Interestingly, she notes that 45% of those self-BATs have produced an abnormal bleeding score (BS). After completing the self-BAT, people are informed if their score is normal/abnormal and are provided with a summary of their result in an accessible format. If the results are abnormal, they are encouraged to visit their family doctor and bring a copy of their self-BAT summary. Amazingly, Dr. James shared that she saw her first patient in October of 2016 who had completed the self-BAT. Since then, 14 of 167 referrals to Dr. James have been people who visited the website and completed the self-BAT. The preliminary data has shown these patients have had a higher BS than other referrals and are more likely to require intervention. These patients have also been diagnosed with a bleeding disorder less often, however it is important to note that currently this is a small sample size. Also, it’s worth mentioning that Let’s Talk Period’s Facebook has amassed 4000 followers and reached over 775 000 people with its informative content.

Dr. James continues to look to the future with this successful initiative. She discussed
developing online accessible tool kits for primary care physicians, nurses, teachers, and parents, so a lack of resources will hopefully no longer be a barrier to diagnosis.

It was a pleasure to have Dr. James as the speaker for our program’s first online discussion over zoom. On behalf of my peers, I would like to extend special thanks to her for her time and sharing her expertise with us.

References:
1. Knol, H. M. et al. The prevalence of underlying bleeding disorders in patients with heavy
menstrual bleeding with and without gynecologic abnormalities. in American Journal of
Obstetrics and Gynecology (2013). doi:10.1016/j.ajog.2013.05.059

In your opinion, what do you think is the logical next step to Let's Talk Period?

Excellent summary Katie! Dr. James and her team have done an amazing job promoting the website and it was exciting to hear about how quickly their work was being used both locally and globally. With that being said, the next step could focus on increasing global accessibility by translating the self-BAT to more languages (but keeping funding limitations in mind)!

I think this is a great…

I think this is a great suggestion! As you mentioned, it will be expensive to translate the self-BAT. Maybe in the future, partnerships with bleeding disorder foundations in other countries could help to make this possible.

Hi Sophia! This is a great…

Hi Sophia! This is a great question since there are so many directions the initiative can continue to grow. In my opinion, as the educational toolkits are developed I think it will be key to promote these. In particular, if teachers began to integrate this into their health lessons, I think that it could increase awareness and decrease stigma in youth and also in their parents.

Great job Katie! Dr. James suggested watching Dr. Jenn Gunter's TED talk on why menstrual bleeding is seen as taboo. I watched it after our discussion and found it incredibly insightful and initiates a larger conversation on the stigma surrounding menstrual bleeding.

Here is the link for anyone who has not seen it, and, similar to Dr. James, I highly recommend watching it and letting us know your thoughts below!
https://www.ted.com/talks/jen_gunter_why_can_t_we_talk_about_periods?la…

Great work summarizing our discussion with Dr. James, Katie! Although we're in unique circumstances right now, I think you facilitated our discussion very smoothly!
You bring up a great point, Maddie, about stigma that was talked about during Dr. James' presentation and our discussion afterwards. I was thinking about how stigma plays such a huge role in seeking medical care and talking about our healthcare concerns. This brings me back to our discussions with Dr. Santiago Perez about seeking treatment for HIV when he said, "Sometimes diseases don't kill, it's the stigma that kills." This concept extends to menstrual bleeding, as Katie said that there are countless women who never see a physician about their heavy menstrual bleeding. I think this also extends to another area that is highly stigmatized, sexual transmitted diseases. While a public health concern, many individuals choose not to get tested regularly for the fear of testing positive and the stigma that may surround them. I believe, as future clinician-scientists, we hold a great deal of responsibility to educate the public, break down stigma surrounding all diseases, and allowing as many people as possible to access the care that they need.

I think you make a good…

I think you make a good point Quentin! The basis behind these stigmas, is a lack of education. I think it is very important like you said to educate the public and ensure people feel comfortable accessing care when they need it. I think this will always be a challenge and something that needs to be addressed. It is something that has once again been seen throughout our current pandemic and has affected the way people responded and treated one another.

This was a great talk Maddie! Dr. Gunter is clearly very passionate and has a great approach to combatting the stigma. I think her approach of putting the facts and the science behind menstrual bleeding is really effective at shifting the perspective from what was once seen as a 'personal' issue to a real biological problem that we can address. I think framing it in this way makes it abundantly clear that these women can and should receive the necessary help they deserve, just like any other medical need.

Great summary Katie! As Quentin and Marty have pointed out about the stigmatization of periods, there are many cultures that have a very stern and closed-minded view on the discussion and education of periods which results in the lack of knowledge and feelings of shame around it. I think the more exposure this website gets to different parts of the world can help combat those feelings and raise more awareness, among doing so, it can help start a movement of normalizing this biological function known as the "period". I applaud Dr. James and her colleagues for their work in creating this free service and hope that in the future it reaches those communities where periods are looked at in a negative spotlight.