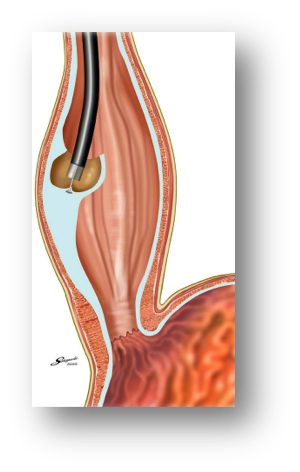 Finding things hard to swallow? A POEM for you

Q: What benign condition causes weight loss, difficulty swallowing solids and liquids, regurgitation, and retrosternal chest pain? A: Achalasia Q: Where in Canada can the latest, nonsurgical treatment for achalasia be found? A: Queen’s University (Kingston General Hospital, KGH) Spring has arrived and with it the welcome influx of talented new faculty and new Programs of Distinction. These highly qualified doctors and their specialized programs have an importance beyond the substantial help they provide to patients. By showing us excellence they remind faculty, hospital staff and administration what we can achieve when innovate to provide the 600,000 plus resident of the South Eastern Local Health Integrated Network (SELHIN) with state of the art quaternary care centre. These people and programs also advance our aspiration to be a nationally leading academic health sciences centre. In this blog I feature a new gastroenterology faculty member, Dr. Rob Bechara, and the POEM procedure that he performs to cure achalasia, a disease in which abnormal function of the swallowing tube (esophagus,) makes swallowing painful and difficult. This is the story of how the POEM procedure came to Kingston and illustrates how new recruitment and new techniques can cure disease, the ultimate in patient-centred care. Let’s begin this blog with a true story-what we in Medicine call a “case report”.

A case of achalasia: A 52-year-old male had symptoms of chest pain, regurgitation and food getting stuck after eating. These symptoms occurred with almost every meal and resulted in a 50 lb weight loss over the past two years. This man was referred by his family doctor to Dr. Paterson who made the diagnosis of Type 3 Achalasia which is the most difficult to treat by any of the currently available treatments. Dr. Paterson explained to the patient last year that a new procedure called POEM might be a better option for him due to its higher success rate, especially for his type of achalasia. After the procedure was discussed, the patient decided to wait until this procedure was available in Kingston. The procedure went smoothly without any complications and an 18 cm myotomy was performed. The following day after the procedure, an upper endoscopy was performed to confirm that the esophagus was healthy and without any damage, and the patient began a soft diet the day after. The patient is now able to eat without experiencing any of the previous complaints of chest pain, regurgitation, or getting food stuck.  Achalasia is a condition in which two problems conspire to prevent food exiting the esophagus. The first abnormality is absent peristalsis (the coordinated, top to bottom contraction, that moves food along the length of this muscular tube). The second, and more important, problem is failure of relaxation of the lower esophageal sphincter (LES) with swallowing (Figure below). This results in dysphagia, regurgitation of bland, undigested food or saliva and sometimes chest pain, weight loss and aspiration. Achalasia is caused by loss of inhibitory nerves within the esophagus, but it is unclear what triggers the death of these nerves.

Achalasia has previously been considered rare (prevalence of 10 cases per 100,000 individuals) but most experts, including Dr. Paterson, Chair of Gastroenterology, believe that achalasia is relatively common. Thus, the modern view of achalasia is that it is relatively common condition that often has significant, adverse impact on patients (and which can now be cured). Typically afflicting patients between age 25-60 years achalasia is often not promptly recognized. Indeed, Up-to-Date suggests that the average time to diagnosis for achalasia patients is 4.7 years from their initial complaints. Patients themselves learn to deal with their condition. They often eat slowly and lift their head or throw back their shoulders to enhance swallowing. Without treatment, patients with achalasia develop progressive esophageal dilation, which sometimes becomes extreme (megaesophagus, diameter >6 cm). In addition they are at a 16-fold increase in risk of developing esophageal cancer. (Sandler RS et al. JAMA 1995; 274:1359). Patients with achalasia in the SELHIN are fortunate to have access to two experts in the diagnosis and management of this condition, Drs. Paterson and Bechara. Dr. Bill Paterson has great expertise in managing this disorder, having diagnosed and treated hundreds of these patients over the course of his career. As a result, achalasia patients are often referred to him from other academic centres. Confirming the diagnosis involves “manometry” a technique that measures pressure in the esophagus as the patient swallows.  In achalasia patients there is an impairment of the coordinated muscular contractions that propel food toward the stomach (called peristalsis) and therefore swallowing fails to open the muscular valve (called the lower esophageal sphincter, LES). The LES must open for solids or liquids to enter the stomach. Three subtypes of achalasia have been identified using manometry. In all types there is impairment of LES relaxation. In type 1 achalasia, there is complete lack of pressure activity in the esophagus with swallowing, whereas with type 2 a low amplitude simultaneous pressurization occurs throughout, and in type 3 (formerly called “vigorous” achalasia) spastic esophageal contractions occur with swallows.

There are several treatments for achalasia and they all involve disrupting the integrity of the LES and esophageal musculature. The first was invented in 1914 by Dr. Ernest Heller, a German surgeon. He devised an operation that made a partial-depth cut in the esophageal muscle to reduce the strength of contraction, the so-called the Heller myotomy (Figure below).

The problem with this strategy is that it requires a major, open, surgical procedure that has hito address what is in essence a benign (though troublesome) dysfunction of physiology. Subsequently, surgeons learned to perfom the Heller myotomy via the laparscope (Figure below), making the procedure signifcantly less invasive, although still a surgical procedure. The laparscopic procedure involves anterior myotomy of both muscular layers of the esophagus and LES (~6cm) extending 2-3 cm onto the proximal stomach. It is successful 85% of the time and the mortality rate is low (0.1%). Although perforations can occur these are usually addressed by the surgeon during the procedure. Also, it is not uncommon for patients to require treatment for acid reflux following the procedure.

Laparscopic Heller Myotomy (from Francis, D.L. & Katzka, D.A. Achalasia: update on the disease and its treatment. Gastroenterology 139, 369-74 (2010).  An alternative approach involves Medicine’s time-honoured love of balloons and “blowing things up”. Although pneumatic dilatation of the LES has traditionally been thought to be less effective than Heller myotomy, it is a much simpler and cheaper alternative. Furthermore, a recent randomized controlled trial reported that efficacy was equivalent with the two approaches, although to achieve this, two dilation sessions were required. Both procedures proved to be highly effective (~95%) in treating type 2 achalasia, whereas success rates were much lower for type 1 and particularly type 3 achalasia.

So what is new in the treatment of achalasia? In 2008, working in Japan, Dr. Inoue developed per-oral endoscopic myotomy (POEM) as a less invasive approach to achalasia. In POEM the muscle layer is split from the inside, using an endoscopic approach (Figure below). Most exciting for SELHIN residents we were able to recruit Dr. Rob Bechara to our Gastroenterology group in 2015. Dr. Bechara did a fellowship with Dr. Inoue in Japan and imported POEM to Canada. Queen’s and Kingston General Hospital (KGH) is the only center in Canada with an operator formally trained in this procedure and one of the two POEM centres in Canada, the other being in Hamilton. In the US there are about 16 centers that are performing POEM procedures, with only 2-3 “high volume centers” (i.e. those performing 100 cases in the past 6 years).

Inoue, H. et al. Peroral endoscopic myotomy (POEM) for esophageal achalasia. Endoscopy 42, 265-71 (2010). The POEM procedure uses the endoscope to disrupt the LES but leaves the diaphragmatic hiatus intact, thereby preserving the reflux barrier and reducing the risk of reflux. More importantly, with the POEM procedure the length and location of the myotomy can be tailored to the patient based on their symptoms, manometry, endoscopy, barium study. This provides greater flexibility than the Heller procedure (increasing the likelihood of achieving relief of the symptoms). The inability of pneumatic dilation and Heller myotomy to disrupt the spastic muscles of the esophageal body is undoubtedly the reason these techniques are much less effective for type 3 achalasia. In the first 5000 POEM cases there have only been 2 perforations (requiring thorascopic/laparscopic draining and repair), 4 cases of delayed bleeding, one pulmonary embolism and one cardiac arrest. Although initially reserved for achalasia, POEM is also performed for other spastic oesophageal motility disorders such as such as Jackhammer oesophagus, diffuse oesophageal spasm (DES), hypertensive lower oesophageal sphincter (HTLES).

Timelines of therapy for achalasia

Of course POEM is not for everyone. Dr. Bechara has indicated that it should not be done in patients with prior radiation treatment to the oesophagus, extensive prior oesophageal mucosal resection/ablation in the proposed POEM field of operation or in people with severe lung disease, severe coagulopathy, or cirrhosis with portal hypertension 38. This story is about the effect that aspiring to excellence has on patient care. Dr. Paterson’s distinguished career, with the creation of GIDRU, created an infrastructure and talent base upon which Dr. Bechara could build. GIDRU, under the able direction of Dr. Stephen Vanner, has created a fertile environment that makes Kingston and Queen’s attractive for young recruits. Kudos GI and thanks KGH and HDH for your support in the launch of this exciting new program!

The Department of Medicine and partner Departments is championing such programs of distinction in many areas (such as stroke, aortic valve replacement, treatment of skin cancers, ablation of heart arrhythmias)-check out our annual report for more stories of innovative people and the impact of their vision for patient care. In the end, we get the quality of care we envision and work to create. Our patients deserve physicians who aspire to greatness. Funding agencies, such as the Ministry of Health and the LHIN, must recognize that patient centred care is not simply defined by convenience or proximity to home; patient centred care also requires we evolve, innovate and bring our patients the latest in medical and surgical care. New Programs of Distinction such as TAVI, Mohs surgery, stroke thrombolysis, and now POEM (to name a few) bring state of the art care to the SELHIN. Finally, talented people bring to Kingston their talented families. Because we were able to recruit Dr. Bechara, KGH was able to recruit his wife, Mei Shi (Pharmacist, Cardiology Program), an experienced hospital pharmacist. Mei’s skills addressed a critical shortage in staffing and she now provides superb care for patients at KGH. These halo benefits of embracing innovation and aspiring to excellence enrich both Queen’s University and our community.

Is there anyone in BC doing…

Is there anyone in BC doing similar work?