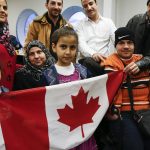 This is a blog about Syrian refugees. They are a specific people coming to Canada at a specific time for specific reasons. However, their stories are entwined with those of past immigrants, such as those of my wife’s family, the Doliszny’s. They came from Ukraine. In a generation the Dolisznys became nurses, lawyers, engineers, epidemiologists and educators. The lesson I take form this is that immigration enriches our country and should be embraced. Canada has a wonderful museum that tells the story of immigration, Pier 21 in Halifax. Read the blog, visit Pier 21 and embrace the value of building our country from the peoples of the world who share the aspiration to become Canadian. Stephen L Archer   Canada has been profoundly shaped by immigration. The Canadian Museum of Immigration at Pier 21 aims to inspire and enable Canadians to explore their relationships with those migrations. We envision opening that conversation on a national scale.

When you think of Syria what crosses your mind? Do you envision despots, barrel bombs and refugees or do you think of the people that were originators of cultivation, animal husbandry and the first alphabet?

The headlines emerging from Syria today show a country that is in a greatly diminished condition, relative to its proud history. Modern Syria was founded after world War I, emerging out of the Ottoman empire under the control of France. It gained independence in 1946 and was a founding member of the United Nations. Syria has been under the control of the Ba'ath party since a coup in 1963 and since 2000 has been led by Bashar al-Assad, a British trained ophthalmologist, turned non-benevolent dictator. The civil war in Syria has led to a massive movement of its citizens to Europe, as summarized in a recent BBC News article (see Figure below).

Canada has recently supported the immigration of over 30,000 Syrian refugees. In light of the far greater influx of Syrians into Europe it is easy to diminish the contribution of Canada to their story, but that would be a mistake.

To put the refugee crisis and the role Canada is playing in a more human context (and perhaps offer an insider’s view) I turned to one of our General Internal Medicine Residents, Dr. Anas Makhzoum.. As a native Syrian he has seen the war and its effect on his country first hand. As a physician in Canada he has been involved in welcoming Syrian’s to Ontario (including Kingston). Anas is well positioned to put a human face on the immigration of Syrian refugees. I asked him to explain, “Who are the refugees and what would they want the people of Canada to know about them?”.

The response by Anas and his wife, Hiba, is below, which provides the personal perspective of Mohammad Abdulmawla, a Syrian refugee who Anas and Hiba helped to settle in Kingston.

When it comes to Syria, there are three things that Mohammad Abdulmawla, a Syrian refugee who arrived to Canada only six months ago, wishes the world to know. “Number one, we are an educated nation. We invented the alphabet,” he said. “Number two, we are rich in history. Some of the oldest cities in the world are in Syria, like Aleppo and Damascus. Number three, we raise celebrities. Did you know the main character in Prison Break is part Syrian, and Steve Jobs’ biological father was also Syrian?” Mohammad continued, taking a sip from his medium Double Double coffee. “But this coffee is just something different. Turns out I didn’t know coffee until I had a little taste of this Canadian heaven,” he laughed, pointing at his medium-size Tim Hortons cup. More than 25, 000 Syrians are now able to enjoy that “taste of heaven” thanks to Canada’s pledge to open its doors to those who fled the war-torn country. According to Mohammad, the Syria we hear about today is nothing like the Syria that was six years ago. “There was no war. There were no bombs and no violence and no chaos. It was a peaceful country. Everyone knew each other,” he said. “I remember walking in the Souq [outdoor bazaar], the crowds, the smell of delicious bakery, the sound of the Adhan [Muslim call for prayer] merged with the sound of church bells going off. We all lived like one,” recalled Mohammad. However, that would all change in 2011. Violence in the country forced more than 10 million people to leave their homes and seek refuge elsewhere. In fact, according to the UN Refugee Agency, one in every two people crossing the Mediterranean in 2015 (half a million people) were Syrians escaping war.   Mohammad and his family were not spared from the violence. On one particular night, the family found themselves salvaging what they can of their personal belongings in a duffle back and heading towards Jordan. “I knew the trip to Jordan would not be easy, but the life we were living was no life. What is life if you can’t sleep safely, if electricity and water only come on for three hours a day? That’s no life, and that’s why we left to Jordan.” Mohammad never thought he would leave Syria, yet alone come to Canada. That’s why when he heard his family was selected to come to Canada, he didn’t know how to react. On one hand, he’s heard about the country and its beauty; on the other hand, his English wasn’t great, he wasn’t used to the cold and certainly not used to living outside of the Middle East. Nonetheless, he said he was ecstatic to start a new life. One where his girls can have a normal childhood, away from the chaos of war. Mohammad, his wife Alaa, and three girls boarded the plane leaving from Jordan to Canada on a January day. During the 16-hour trip, Mohammad and Alaa were consumed with thought. According to Mohammad, his worries were put to an end immediately after arriving at Pearson International Airport. “When we arrived we felt overwhelmed, but in all the good ways. Seeing all the Canadians at the airport coming to greet us, people we didn’t know, taking us in like family. We were overwhelmed with kindness and love and support. We knew we’ve come to a country that we’d call home, to people we’d call family.” Mohammad’s family was not the only family that was met with kindness upon arriving to Canada. In fact, the more than 25, 000 refugees who arrived were greeted in the same way. To date, the Canadian government has committed almost 1 billion in humanitarian, development and security assistance in response to the Syria crisis. Canadians have also opened their hearts and homes, donated money, furniture, clothes and toys. “Our transition to Canada was smoother than we could have ever imagined,” said Mohammad. “We are forever in debited to this kindness, and my dream is for my daughters to grow old and get a good education so they can repay this kindness by contributing to making this country even greater.”

Like each wave of immigrants, whether from Ukraine, Vietnam or India, these new Syrian-Canadians will undoubtedly bring their intellect and drive and enrich Canada. Hopefully, Canada will become an oasis of stability, peace and justice for them (features many of us born in Canada take for granted). When it comes to Syria perhaps we should think of both its rich heritage and its current crisis. This fall makes us mindful of the misfortune that can befall any civilization and reminds us that all nations, including Canada, may at some point require help. While it is true that Syria gave us the first alphabet (the Ugarit alphabet) it is equally true it has seen a societal collapse of horrible scale and depth. Hats off to Anas and others who are making the word a little more humane.

Thanks Steve, for a great…

Thanks Steve, for a great blog. My father was one of those immigrants who came through Pier 21 in 1949 - an ambitious and hardworking young man searching for a better life for he and his family, and willing to contribute to this great country. You remind us that although customs and culture may change, those fundamental human drives remain constant in our new arrivals.