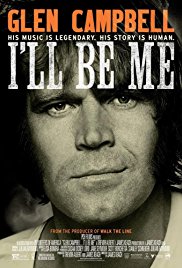 I'll be me: Understanding Alzheimer’s Disease Through the Music of Glen Campbell

When I was 14 years old I started playing guitar. I had guitar heroes, Andres Segovia, Chet Atkins and Glen Campbell. I loved Glen’s finger picking style and bought the same Ovation guitar he played on the Glen Campbell Goodtime Hour (1969-1972) (in fact I still have that guitar). The Goodtime Hour featured Glenn’s songs (By the Time I Get to Phoenix, Wichita Lineman, Gentle on My Mind), his fluid guitar playing, and lots of humour. Glenn Campbell had the entire package: handsome, talented, funny and, not surprisingly, he sold tens of millions of albums. He had a tumultuous life with 3 marriages and a destructive addiction to alcohol and cocaine. In his third marriage he finally achieved sobriety. However, his friends and family began to notice changes in his speech and behaviour that suggested something was seriously wrong with Glen. He could still sing and play-but he was forgetting-forgetting almost everything but his music. Glen Campbell was in the clutches of Alzheimer’s disease. With that diagnosis he and his family could have retreated but instead courageously chose to do a final national tour to say goodbye to his fans. Fortunately for us James Keach and Trevor Albert also made a documentary of this tour. This powerful film shows the heartbreaking roller coaster that is life when Alzheimer’s disease touches your family. You can stop reading here and let Keach’s powerful documentary “I’ll be me” speak for itself.

The video of Campbell’s Goodbye Tour begins with tender moments at home and on the tour bus as Glen’s family works to keep him on task. As the tour progresses so does Campbell’s dementia and there are painful scenes of frustration. The Campbell family’s joy and pain is compelling and at times is hard to watch. The documentary is more instructive about the impact of Alzheimer’s disease than any dry medical dissertation. I’ll be me gives us the privilege of being with the Campbell family in clinic and in public and then following them home for a house call. It’s at home and in private that the real challenges emerge.

Through 425 days and 151 shows his wife, sons, daughter and friends help this remarkable man say goodbye to his fans. There are moments that will make you laugh (when he covers for a mistake on stage joking, “that’s the problem…if you do it perfect they expect it to be perfect all the time”. There are moments when you will cry (when the teleprompter stops during the show he stops singing immediately-the words are gone). But all in all, the film is instructive and should inspire us all to get involved in supporting research to cure this scourge.

What is Alzheimer’s disease: There are few consequences of disease worse than loss of memory for in memory lies our very identity. As the population ages we are increasingly affected by diseases that impair memory (dementia). The most common cause of dementia is Alzheimer’s disease, named after the physician who first described the syndrome in 1906. Dr. Alois Alzheimer reported the case of a woman with impaired memory, unpredictable behaviour and difficulties with language. When she died he examined her brain and noted abnormal material infiltrating the bran, including amyloid plaques and tangled fibre bundles, which are called neurofibrillary tangles (or tau tangles). According to the National Institute of Aging Alzheimer’s disease is the 6th most common cause of death. However, since it affects older people more commonly it is the 3rd most common cause of death in older people. Starting in the hippocampus, the home of memory formation, neurons progressively die in Alzheimer’s Diseases and ultimately the brain shrinks.

Early in the disease the symptoms vary substantially amongst affected people. The first signs of illness may be when family and friends note impaired memory but many people present with other manifestations of impaired cognition (e.g. difficulties with word-finding, vision and spatial issues, impaired reasoning and/or poor judgment). For some the disease is detected when the day-to-day activities of life, such as bill paying, can no longer be performed; other patients wander off without reason. The one commonality in Alzheimer’s diseases is the pain it causes the family. The inexorable, progressive deterioration of fathers, mothers, friends, or colleagues is heartrending. Unlike a heart attack, which is brutally fast, but if treated leaves the essence of the person unchanged, Alzheimer’s attacks our identity and steals our memories. We don’t know the cause of Alzheimer’s disease, although mitochondrial dysfunction and increased production of destructive oxygen radicals in the brain is implicated. We also know that variants in the sequence of the apolipoprotein E (APOE) gene predicts an increased likelihood developing late-onset Alzheimer’s. While we are far from a cure there are some useful drugs that modulate neurotransmitter levels, including Donepezil (Aricept®).

I encourage you to watch the Campbell family’s heroic journey. “I’ll be me” should be required viewing for students of medicine of all ages.

Footnote: I’ll be me is available on Netflix®.

Fred: Thanks for your…

Fred: Thanks for your comments. I agree, the woman's observation of her husband "dying in stages" (the loss of self preceding the actual demise) is a feeling shared by many whose loved one has Alzheimer's Disease. The hope is that, like Glen Campbell, there remain embers of the old person even though their flame is diminished.

Thank you for the share. It's time to raise the attention of the whole society to pay attention to the disease for preventive measures and more care to the patients. Drug design in this aspect quite lag behind, and there is no effective treatment for it at present. But recently I read a coverage on a new researching model-"mini brain" which stimulates a quite similar study model for such neuron diseases. And the tech is of great potential to bring some insights to the drug discovery.

Thanks very much for the…

Thanks very much for the reminder to watch the Glen Campbell documentary, Stephen! I know Netflix ( the new and real TV) has it in its inventory. While I was at The Whig, I did a bit of work with the local chapter of the Alzheimer's Society including hosting their annual fund raising coffee break event. At one of those kick off "coffee breaks" I had the opportunity to chat with a caregiver. This woman's husband had been diagnosed some three years earlier and was enduring ever increasing challenges as was she. She explained the loss she felt in a way that I'll always remember. Alzheimer's was in effect causing her to witness the death of her husband twice. She felt that he "died" when he was initially diagnosed, suffering many early symptoms requiring her care and vigilance and that she would surely nurse him to his final death after the ravages of Alzheimer's had finished taking their toll. Catastrophic outcome to be sure and a poignant observation by the "other victim" of a dreadful disease.

Stephen, Thank you for…

Stephen, Thank you for sharing this story and pointing out the documentary “I’ll Be Me”. There is also a local story worth highlighting about the intersection of music and memory. Our very own Dr. Jackie Duffin and her colleague Dr. Lola Cuddy from the Department of Psychology at Queen’s have investigated the relationship between music and memory in older individuals with Alzheimer’s disease for several years. In 2005, the published an influential article on the topic: Cuddy LL, Duffin J. Music, memory, and Alzheimer's disease: is music recognition spared in dementia, and how can it be assessed? Med Hypotheses. 2005;64(2):229-35. PMID: 15607545. This article was awarded the David Horrobin Prize for best article published in 2005 in the journal “Medical Hypotheses”, details of which can be found here: https://www.elsevier.com/about/press-releases/research-and-journals/the…! Since then, research on music and memory has expanded dramatically, and public perception of this complex relationship has grown with books such as Musicophilia by Oliver Sacks.