Every disease has a point where its lethality is materially diminished, when (at least through the historical lens) one can say it was tamed or vanquished. For coronary artery disease, that point occurred when there was widespread application of coronary revascularization (bypass surgery and angioplasty) and clot busting drugs (thrombolytics); for chronic myelogenous leukemia it was the clinical application of multikinase inhibitors such as Imatinib(Gleevec); for polio it was the development of effective vaccines; and for HIV it was the perfection of a multidrug cocktail containing highly active antiretroviral therapy(HAART). At these inflection points, medical innovation changes the natural history of the disease and with this, the disease is prevented, tamed or cured.

Diabetes care has already had two such inflection points: the discovery of insulin and the development of other glucose lowering medications (such as metformin, sulfonlyureas, and more recently glucagon-like peptide-1 (GLP-1) receptor agonists, dipeptidyl peptidase 4(DPP-4) inhibitors and SGLT2 inhibitors). Arguably the management of diabetes is undergoing a third inflection point now, with the development of sensors and monitors that allow continuous glucose monitoring. At a minimum, better blood glucose measurement allows more precise adjustment of manual insulin dosing by the patient to reduce variability in blood glucose levels. In its most robust form, the glucose sensor can coupled to an insulin pump that automatically provides an appropriate dose of insulin (informed by the patient’s real-time, interstial, blood glucose results). This latter innovation can be considered a bionic pancreas.

I was inspired to write this blog on advances that optimize blood glucose control (while reducing dangerous high and low blood sugars) by Dr. Robyn Houlden, Chair of Endocrinology at Queen’s University. Her Jan 3rd2019 Medical Grand Rounds presentation, Advances in Diabetes Technology struck me as a coming of age for the science of patient-centred, diabetes control. I also learned that reducing glycemic variability results in more time at target blood glucose range and less risk of hyper- and hypoglycemia. This reduces a person’s acute symptoms and improves meaningful health endpoints, as we will discuss.

The discovery of insulin is a very Canadian story, and has been best told by my late friend, Canadian historian Dr. Michael Bliss. In his classic book,    The Discovery of Insulin, 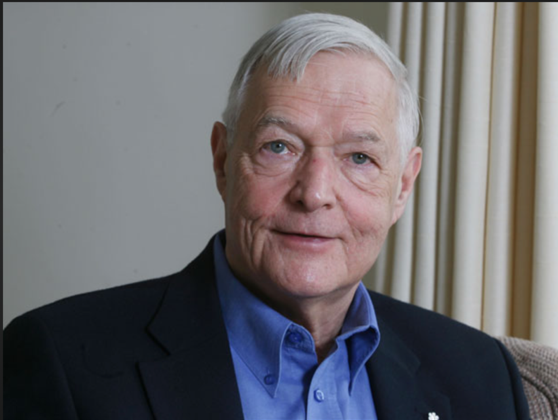 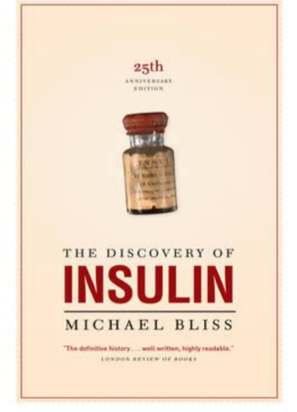 The late Michael Bliss Canadian historian, Fellow of the Royal Society and Officer of the Order of Canada

he tells how teams at the University of Toronto (Banting, Best, and Macleod) and University of Alberta (Collip) rushed to isolate insulin from dogs, and then pigs, to treat children who were emaciated from type 1 diabetes. These translational researchers  found and lost the recipe for insulin, and struggled to identify and isolate the active factor the pancreas was excreting, ultimately naming it insulin. Bliss makes the race to isolate and administer insulin into compelling scientific thriller.

While insulin is a medical miracle, many people with diabetes are still unable to achieve optimal glycemic control, despite multiple fingerpicks each day to measure blood glucose and adjust their insulin doses. Either they have blood glucoses that are too high (which leads to diabetic retinopathy, diabetic neuropathy, as well as death form premature cardiac diseases (like heart attack and stroke), hypoglycemia, which makes them confused, weak and tremulous or alternate between these extremes! Hypoglycemia, if not rapidly corrected, can be lethal. In efforts to achieve tight glycemic control (i.e. near normal blood glucose levels), the risk of hypoglycemia is increased.  When hypoglycemia occurs at night the results can be fatal, because the patient may have reduced ability to intervene. Clearly a system that monitors blood glucose more continuously is needed to smooth out these sugary peaks and valleys.

The state of the art in this regard has been the combination of frequent blood sampling of blood sugar, obtained by finger sticks with a glucose meter. 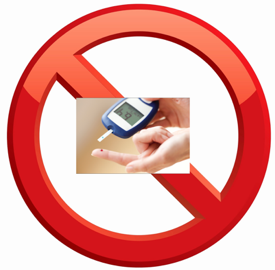 This is expensive and uncomfortable; but it works. If blood glucose is closely monitored by multiple finger stick and insulin dosing customized to address the test results, patients have better outcomes (see below).

We also have the hemoglobin A1C assay (also known as the A1C test), a blood test that gives an indication of a person’s average blood glucose over the prior 3 months. When blood glucose levels are increased, hemoglobin is covalently bonded to glucose by an enzymatic process called glycation. High A1C levels signify that the patient’s blood glucose has on average been at a high level over the life span of the red blood cells (~ 3 months). Diabetic complications have been shown to decrease by 3% for every 1 mmol/mol decrease in A1C.

We know that more intensive insulin therapy can lower A1C levels (below). This translates into less long term complications for the person with diabetes! 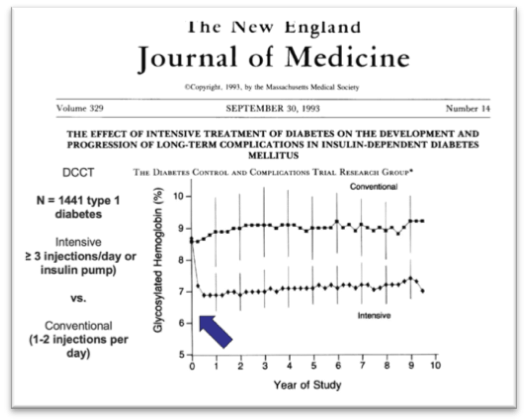 Knowing a person’s A1C allows goal setting and guides changes in general strategy, but these values do not reflect the dynamic, hour to hour, fluctuations in blood glucose which are themselves both dramatic and predictive of outcomes for people with diabetes.

Moreover, a trial assessing the benefits to cardiovascular event rates of reducing A1Cc below 6.0%, using increased amounts of medication, found higher mortality and the study was terminated prematurely.

Thus the old-fashioned strategy of addressing high blood sugars simply by increasing insulin dosing promotes hypoglycemia and causes harm. The use of new sensors, discussed by Dr. Houlden, allows the patient to know their blood glucose levels in real time and adjust insulin doses accordingly.  As Lord Kelvin’s quote indicates at the beginning of this blog, if you can’t measure it you can’t change it! Better blood glucose measurements allows patients to attenuating highs and avoid lows.

Here is such a sensor (applied to the skin with a small probe sticking into the tissue below). Diagram on the left actual probe (white disk) on right, beside the telemetrically connected, wireless monitor. 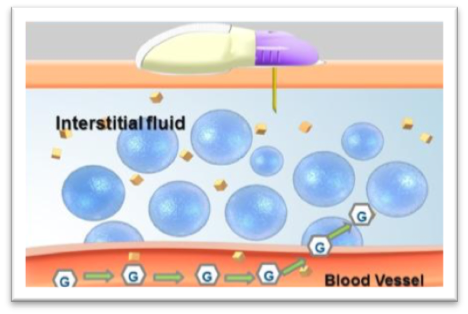 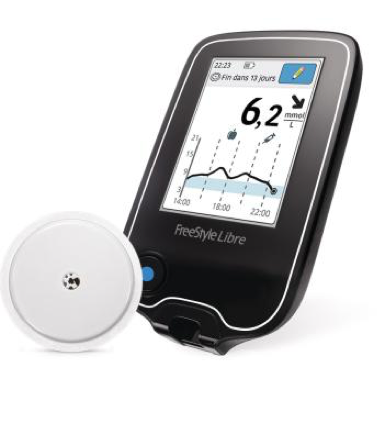 Glucose in the tissues interacts with an enzyme on the tiny needle of the sensor which is applied through the skin, every 2 weeks. The interaction of the patient’s glucose and the enzyme glucose oxidase (coated onto the sensor) makes hydrogen peroxide, which generates an electrical current that tells a remote device (such as a smart phone) the blood glucose level. These devices measure interstitial glucose levels over >200 times day. The device seen above (one of several on the market) is the Abbott Freestyle Libre® and the sensor (which costs $90 each) lasts for 2 weeks. It provides readouts of the blood glucose when the patient brings the reader (for example an iPhone) into proximity with the sensor on the skin surface.  Other such devices continuously and automatically display blood glucose and offer alarms when high and low values occur.

Dr. Houlden contrasts the greater information provided by this continuous glucose monitor, in the example below (on right) versus that obtained by conventional fingerstick monitoring (on the left). Note that the conventional monitoring technique missed many peaks and valleys (which would have led to inadequate or excessive insulin dosing, respectively).

Dr. Houlden highlighted the importance of focusing on the idea of glycemic variabilitywith the goal of maximizing the time the patient spends with a blood glucose in the ideal or “target” range. Patients can have identical A1C values and yet have markedly different times in target range, due to their individual glycemic variability. Continuous glucose monitoring below shows two patients with A1C of 7.6% who have very different blood glucose variability (see below). Patient A spends much more time in the therapeutic range (dark blue) with less variability (light blue) than does patient C. Patient A will (all other things being equal) do better! 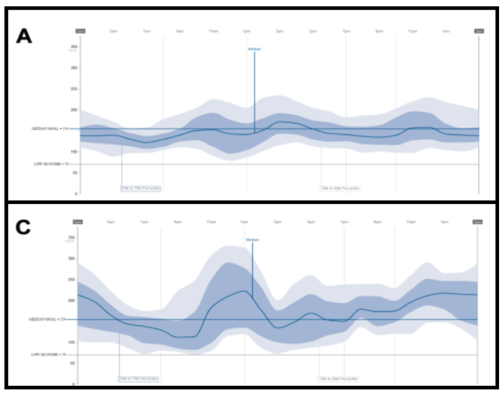 Recent data obtained in 3262 patients with type 2 diabetesstratified blood glucose control, measured using a continuous glucose monitor, into 4 levels. Those who spent the most time “in target range” (black bars, i.e. the “best” quartile) developed substantially less diabetic retinopathy and this benefit was independent of the average blood glucose control as measure by A1C! 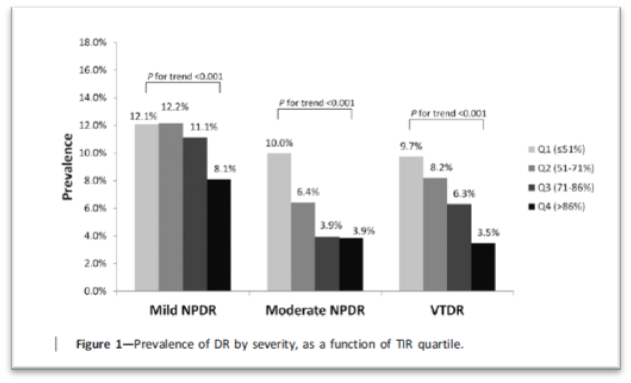 The future has arrived and now our patients are coming to the Endocrinology clinic at the Hotel Dieu Hospital in Kingston armed with their ambulatory glucose profiles (showing hundreds of daily measurements obtained over several weeks). They can then use this data to inform the interaction with their endocrinologist and ensure medication adjustments are optimized. 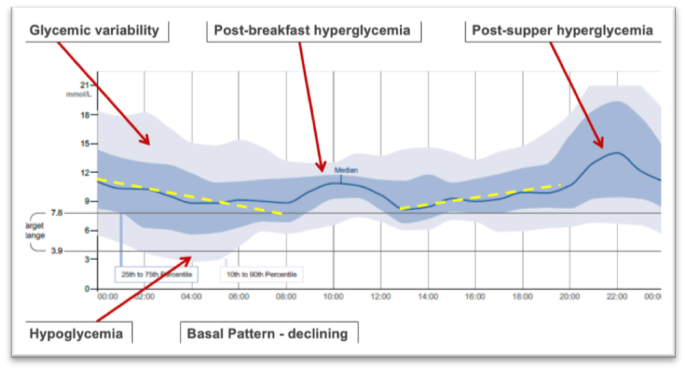 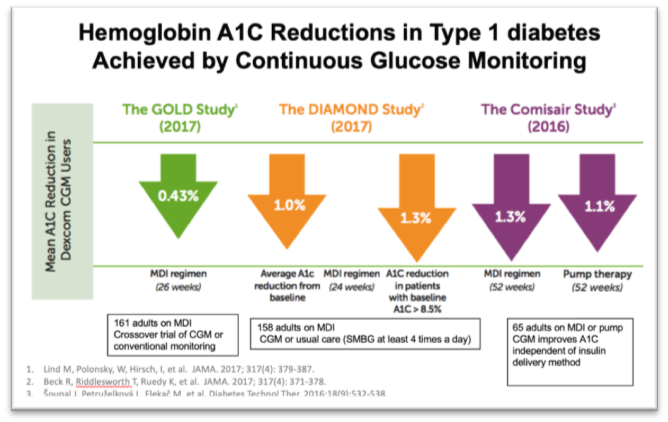 That’s great but the data from these monitors is retrospective (i.e. the data shows what happened in the past). Dr. Houlden next discussed devices that both measure current blood glucose and predict imminent changes in blood sugar, so that the patient is forearmed and can take appropriate action. One such monitor is the Dexcom G6 (see below).It not only tells the patient their current blood glucose but predicts upcoming results (by calculating rates of change). For example, the Dexcom G6 shows the current blood glucose with an arrow indicating whether the level is on its way up, down or holding constant. One can imagine if you’re about to engage in sports or drive a car this vector information could be hugely helpful information that would inform the decision to eat, take insulin etc. The data can even be displayed on a smart phone or Apple Watch! However, this system costs ~$3500/year and is not covered by the Ontario Drug Benefit (ODB) program (although many private insurance companies cover the technology). 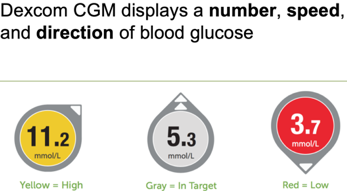 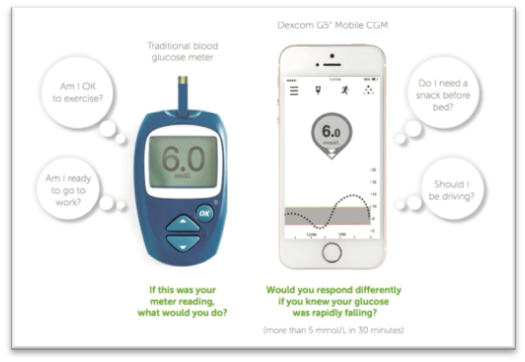 Of course, even with these data and the prediction of what is about to happen, the patient still needs to make complex decisions, eat? take more insulin? Wouldn’t it be nice if the information from these sensor could automatically guide therapy…like the pancreatic beta cells do in a healthy person. Well there is such a closed-loop system and Dr. Houlden is studying it in an international, clinical trial of its utility in children and adults.  ThisMedtronic 670G® device (below) combines the glucose sensor with an insulin pump that delivers insulin every 5 minutes to maintain target blood sugar levels automatically. After calibration and a period of manual operation during which it learns a patient’s blood sugar patterns the pump can operate in the automatic mode and deliver insulin in response to blood glucose measurements, effectively functioning somewhat like the pancreas.  However, it is not a fully automatic bionic pancreas as the person using it still has to manually bolus insulin for carbohydrate eaten with meals. 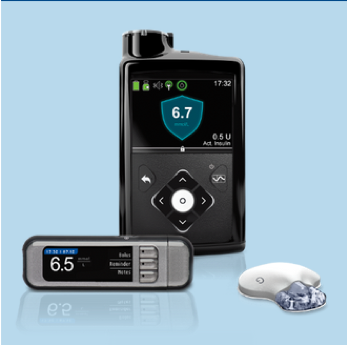 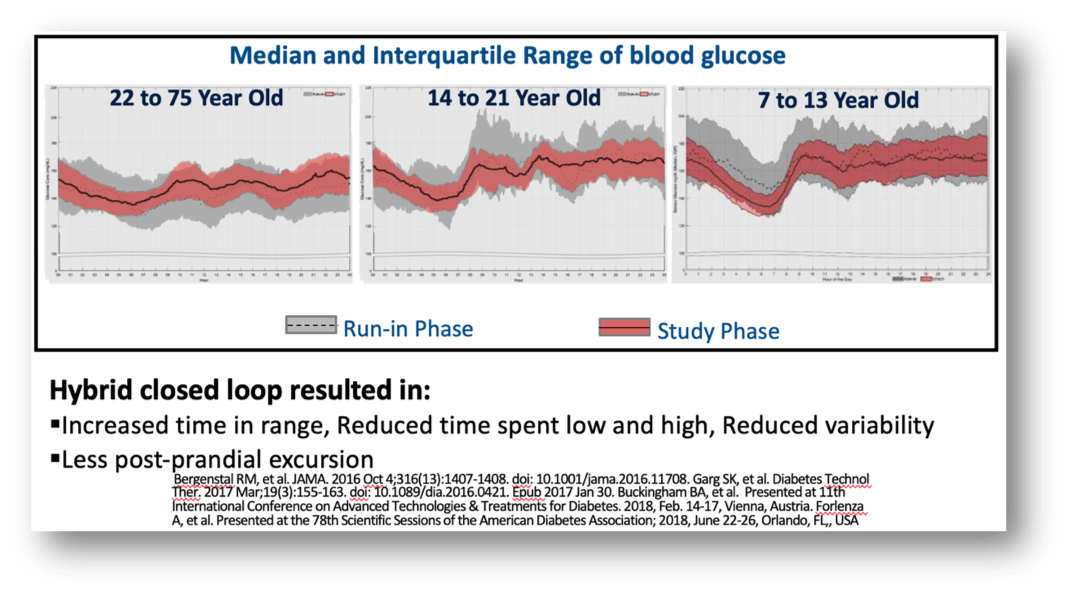 Caveats:It is important to emphasize that not all eligible patents are currently receiving continuous glucose monitoring (due to cost and lack of ODB coverage). In addition, the safety and efficacy of using the hybrid closed loop is currently being assessed in a larger international trial. Finally, these continuous glucose monitoring systems are best studied and most widely used in people with type 1 diabetes. Their role in type 2 diabetes (which is more common and is often found in adults with obesity and metabolic syndrome) is less clear. Stay tuned, perhaps we are nearing the end of fingerstick monitoring!

The final bit of good news is Queen’s specific, Dr Houlden and I are delighted to announce that with the arrival of our newest endocrinologist Dr. Bikram Sidhu, we now have a Division of 5 faculty members (see photo below).  This reflects achievement of a strategic plan to improve services to the South East LHIN formulated at a Department of Medicine Retreat 4 years ago. 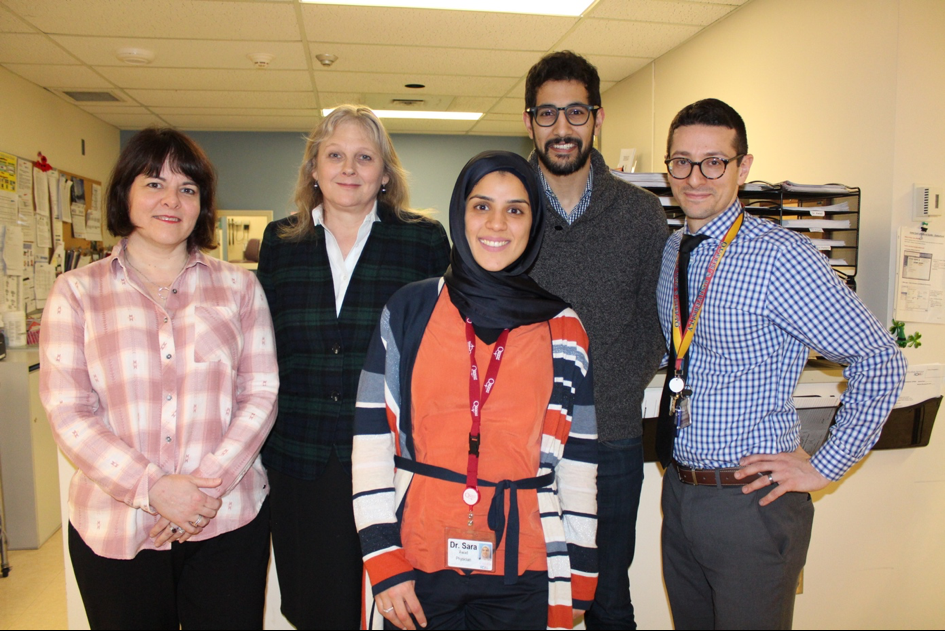 This critical mass has reduced waiting lists for diabetic care and other endocrinology services. Moreover, we have now applied to the Royal College to create Queen’s University’s first endocrinology training program. How sweet it is!