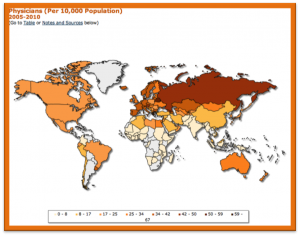 The Land of Opportunity for Canadian Medical Student Wannabes: Scotland?

I recently received a letter from a concerned parent who wondered how we had failed to accept their offspring into our Medical School. This young person had a near perfect GPA, had won multiple awards, and had achieved a record of community engagement that might have made a young Mother Theresa blush. While it might be dismissed as a case of a parent wearing rose coloured glasses and failing to appreciate how their child stood in comparison to the talent pool, I was moved to investigate by the metrics this parent provided. The applicant had a grade point average (GPA) of >3.9+, a large merit-based scholarships on entry and throughout undergraduate training, and had performed social service to the community. On pursuing why this person had not been granted an interview, it became apparent that they had scored below our threshold in one of the four domains within the Medical College Admission Test (MCAT). This raises some questions. Is the MCAT a valid predictor of success as a physician? Do we need more positions for students in our medical school? Does Canada have the right number of doctors? Beginning with the MCAT: This standardized test predicts ability to pass licensure exams, although the predictive value is “small to medium” size. Moreover, the MCAT at best predicts whether a medical student will pass a licensure exam...not the holy grail of predicting “Good doc vs Bad doc”. To answer the question why we use the MCAT, I turned to my friend and colleague, Associate Dean, Undergraduate Medical Education, Dr. Tony Sanfilippo. In his recent blog, he summarized the state of admissions at our Medical School, noting, “We received 3818 applications for our 100 positions this past year. All Canadian schools receive many times more applications than they can accommodate. Statistics collected and published annually by the Association of Faculties of Medicine of Canada indicate that the Canadian schools collectively received 34,048 applications for their 2,877 total available positions in 2011. Assuming an application per candidate ratio of 3.3 (as Ontario statistics would suggest), it would appear that at least 10,318 individuals submitted applications that year.” Thus, he explained, the volume of applicants pushes us to use the MCAT as a discriminator, the MCAT being the only standardized aptitude metric that every applicant supplies. On further reflection, though, the problem may not be too many applicants to the medical school; rather there may be too few medical school positions available. This of course relates to whether Canada had sufficient doctors to meet its demand. This is a complex question which is hard to answer in a government payer model of health care. While the health of populations relates more to clean water, adequate food and freedom form wars than the number of doctors/10,000 population its nice to have access to an MD when you are having a myocardial infarction or need your hip replaced. So, do we need more doctors in Canada? To answer this I suggest we compare the supply of physicians in Canada to other countries? It turns out we are in the middle of the pack: 82nd/144 countries ranked (with the highest number of doctors/10,000 inhabitants being country #144). Canada is on par with Mexico, but behind the USA and Western Europe. There has been modest progress in providing more physicians to serve Canada, according to the Canadian Institute for Health Information. They indicate a 14% increase in the number of physicians in Canada between 2007 and 2011; MDs now number 72,500. They conclude that during the last five years, the number of doctors in Canada has increased three times faster than that of the growth of the general population (4.7 per cent over the same time period). Of course this does not correct for geography (physicians are plentiful in cities not in the country) nor does it deal with a new reality of a shorter work week for physicians, many of whom work part time. This growth of the supply of doctors out of proportion to the population was a major concern of the Barer Stoddart report of 1991. This report, while well intentioned, was well received by the government and led to physician shortages in Canada that were not corrected for over a decade. While I disagree that Canada is over-doctored, a recent concern has arisen that might give solace to those in the ‘too many doctors/medical students’ camp. In his weekly Dean on Campus Blog, Dean Richard Reznick summarized concerns about potential physician unemployment in Canada. He quoted Andrew Padmos, the Royal College’s CEO, who concluded that…“more than 14 percent of 2011 Royal College Certificants did not find staff appointments or employment within 4 to 12 weeks of writing their exams.” Canadian doctor wannabes have decided the problem is too few spots for training in Canada. Canadian Resident Matching Service (CaRMS), the agency responsible for matching medical graduates with a post-graduate training position or residency in Canada, reports that there are Canadian citizens in medical training in 80 schools in almost 30 countries. There are now about 3,500 Canadians studying medicine overseas, which is 1/3 of the total number in training in Canada (10,500).  A number of factors might contribute to a perceived excess of physicians. Consider whether graduates have unrealistic expectations: failing to find a job in the city of preference is not the same as not finding a job. Consider whether we are training the wrong types of doctors: there may be inadequate jobs for critical care specialists in Canada but there are simultaneously ~ 30 rheumatology vacancies. In addition, an inadequate medical student training capacity may be masked by importing International Medical Graduates (IMGs). Finally, the lack of a mandatory retirement age, while laudable in many regards, can limit the opportunities for trainees seeking to enter the profession.

The CaRMS survey further indicated that, “90% of the students who go abroad would like to return to Canada.” In most cases this will be challenging. Sandra Banner (left), the executive director and CEO of CaRMS, noted, "This year I have 628 Canadians studying abroad in this match. The number of positions available for entry-level training is going to be around 400 positions. In addition we have 1,800 immigrant medical students who want to come to Canada. There definitely will be Canadian students who will not get back into Canada." Moreover these kids are paying a fortune for the privilege of studying abroad. While we worry about raising tuition in Canada to meet expenses, foreign schools charge them $50-70,000/year. St. Andrews University in Scotland launched a program that specifically targets Canadians, allowing them to go from an undergraduate degree to Medical school and then spend time at a Canadian school. The program outline says Canadian and American students will get dedicated assistance with preparation for exams and residency matches at home. The program costs well over $250K in tuition alone.

So my advice to this young person (and parent): “Do not let this setback discourage you. Retake the MCAT, apply broadly to number of medical schools and do not give up on your dreams. Many of my classmates (I went to Queens when the standards apparently were much lower) had applied multiple years before being accepted.” I would also suggest that leaving Canada to train is expensive and fraught with risk, with few positions available at home or in the country offering the expensive MD training. In the end, I believe the system is broken, but we have yet to find a better one. We might consider a more discretionary use of the MCAT results and expansion of our interview pool by adding nontraditional interviewers, for example carefully selected patients and civic leaders. We should also consider expanding our medical schools and residency programs, allowing Canadians to train at home. Perhaps this could be tied to some element of service upon graduation. In the mean time, we continue to have a superb medical school which works diligently to ensure quality, fairness and which strives, with much success, to train Canada’s Future Physicians.

Good article but no…

Good article but no froseeable solution as the article says

Great article. Though you…

Great article. Though you danced around - without explicitly stating - the fact that we have a doctor shortage in Canada because educational institutions and certification bureaus are throttling licensure, effectively facilitating the creation of a monopoly that benefits a few major players to the detriment of the average Canadian citizen. Medical licensure in Canada isn't designed to train excellent healers. It's designed to monopolize the medical industry. That's not conjecture. It's obnoxious truth.