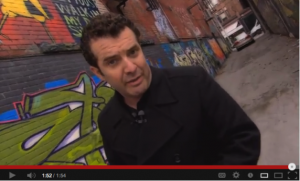 A Report on Influenza From The State of Denial

Did you get your flu shot this year? Yes, I am asking you….More importantly, Canadian icon Rick Mercer and I are asking you, but read on. Influenza has a disarming common name, the flu. This virus, spread by droplets through the air is, however, ‘fully armed’. It can knock a a healthy adult off his or her feet suddenly, with a potent assault characterized by fever, chills, coughing, sore throat, achiness, headaches, and fatigue. It can also kill. Amazingly, influenza is highly preventable through immunization - and yet each year there is a struggle to get patients (and health care professionals) to take the vaccine. Safe and effective vaccines have been available and used for more than 60 years. Unfortunately, the struggle is yearly because the virus evolves and new strains must be addressed with new vaccines. This year the global surveillance system has identified A/H3N2 as the predominant type of influenza virus afoot, and the resulting vaccines focus on this strain. Based on my informal survey of shivering, sneezing, febrile friends and co-workers in two countries, the odds are you didn’t. This might make sense if the vaccines were ineffective or dangerous, but the contrary is true. They are safe and they work. The enemy of rational prevention in the case of influenza is a powerful mixture of ignorance and misinformation, with a touch of fear of needles. Here are some of the flu fallacies:  1) I don’t get the flu. Stay tuned. You likely will at some point. More importantly, you may contract the flu, and if healthy, do well. However, you may be the vector who passes influenza on to your patients, your parents or someone with a chronic medical illness. 2) It’s just a cold…it will go away on its own. There is an unfortunate conflation of the common cold and its benign course with influenza (and its admittedly variable course). The common cold is chiefly caused by rhinoviruses and resolves with little in the way of complications or mortality in 7 days. Influenza is a different virus and because of its constant evolution one’s immunity cannot be relied upon from year to year. Unlike the common cold, the influenza virus has the potential to cause serious illness - even death - in previously healthy individuals. Indeed many states in the USA are reporting flu deaths this week in previously health children and adults. 3) The vaccine is dangerous; it causes neurologic complications. This is largely a myth. True there is Guillain-Barré syndrome (GBS) a rare autoimmune cause of muscle weakness and paralysis. However, the incidence of GBS does not increase with vaccination. In careful studies, such as a recent national trial of flu vaccine vs. no vaccine in Taiwan, there was a 19% decrease in hospitalization in those who received the flu shot, and no increase in neurological or autoimmune complications. 4) I am just recovering from a cold. The flu shot is best taken early in the fall, leaving lots of time to recover and get vaccinated (and little science to suggest that vaccination on the heels of the common cold is harmful). 5) I got the flu shot once and still got the flu. It is true that protection takes upwards of two weeks to develop and in the interim you could get the flu. However, the vaccine is one of the most effective interventions in the Medical toolkit. The World Health Organization estimates that among healthy adults, influenza vaccine can prevent 70-90% of influenza-specific illness. Among the elderly, the vaccine reduces severe illness and complications by up to 60%, and deaths by 80%. 6) It’s only for the elderly. A 2011 meta-analysis of 31 trials of the influenza vaccine found that flu shots were efficacious 67 percent of the time. Interestingly, the populations that benefited the most were not old and included: HIV-positive adults aged 18 to 55, healthy adults ages 18 to 46 years and healthy children ages 6 to 24 months Citation: The Lancet Infectious Diseases 12 (1): 36–44. doi:10.1016/S1473-3099(11)70295-X 7) It’s too late…maybe next year. Not true. With great Canadian resources for managing influenza, advice from local influenza experts like Dr. Gerald Evans, Chair of the Division of Infectious Diseases at Queen’s University and public health guidance from Dr. Kieran Moore, Associate Professor in Family and Emergency Medicine & Associate Medical Officer of Health for KFLA (Kingston, Frontenac, Lenox & Addington), we have a clear view of the spread of influenza in Southeastern Ontario and in Kingston, and guidelines on how to prevent and manage it. While the peak appears to have occurred, we are not out of the woods yet.

As Dr. Moore notes, “Admission pressure will persist this week. Mortality should peak in the next 10 days. There should be a slow steady decline in ED visits and admissions. Given the severity of this H3N2 season there is often only a small second wave of influenza B activity which we typically see peak in late February and early march." In the words of Dr. Evans, “Being vaccinated against influenza is a duty of care.” Bottom line: Influenza is still afoot in the community there is still good reason to get vaccinated and protect yourself and those around you. I could go on, but as part of the medical establishment those skeptics amongst you might worry about bias. So I refer you to a Canadian whose impartiality is beyond reproach: Rick Mercer.

'Based on my informal survey…

'Based on my informal survey of shivering, sneezing, febrile friends and co-workers in two countries, the odds are you didn’t.' - Isn't there another possible explanation? Many of them might have got vaccinated (like myself), and got terribly sick anyway (like myself). During this year's flu season, I couldn't help but notice how many of my friends and colleagues got sick despite being vaccinated. What are the odds that the wrong strain was targeted? I don't claim to be an expert, but anyone with eyes to see can't help but notice how many people who got duly vaccinated got seriously hit anyway, myself included. Is the argument here that if a different strain had been identified many more people might have got sick? How can one actually test the claim that the right strain was identified? It seems beyond doubt to me, compared to past experience, that this year very many more people got sick who got vaccinated when compared to years gone by. udo schuklenk

Dear Udo Unfortunately there are many viruses that cause upper respiratory track infections in addition to influence. These viruses often cause illness that appears similar to influenza (mimicking the respiratory problems-like the common cold virus-adenovirus) or the gastrointestinal side effects (like norovirus-which is very common this year-see http://www.cbc.ca/news/canada/british-columbia/story/2013/01/06/bc-noro…) The Influenza vaccine is >70% efftive in preventing influenza but does not protect against the many other viruses that pop up in the fall and winter months. Hope this helps