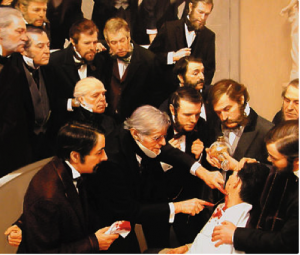 Medical Grand Rounds has been the premiere education event of Departments of Medicine since the foundation of the modern Department of Medicine. Historically, patients were presented and their cases carefully dissected, in their presence, for the edification of the audience: a mixture of trainees and faculty members. Grand Rounds was a mixture of show and tell, how-to and meet the expert. The wisdom of the experienced physician was distilled into one hour and consumed by the medical house staff. Of course, Grand Rounds was always about much more than education…there was pageantry and ceremony which was at once conserved amongst Universities and yet, like Darwin’s finches, unique in each micro domain. In most centers, the gray-haired senior faculty sat at the front, always in the same seat; decades would pass without Dr. Big Bottom moving chairs. Higher up in the auditorium the faculty sat and higher still the students and interns. Grand Rounds was also a great place for people watching: Who has sleep apnea? Who are the opinion leaders? Who are friends (or enemies)?.....Go to Grand Rounds. The personality traits of individuals and the culture of the Department are on display for all to see. Jokes are told, heart sounds are imitated, important events in the life of the Department are celebrated, new colleagues are welcomed and the departed remembered. Some days, Medical Grand Rounds is High Science, some days it is Great Medicine and other days, it's Theater of the Absurd. Another interesting occupation of some of the audience is, broadly termed, unrelated work. Some physicians are locked on their iPhones and others bring stacks of EKGs to rounds, emerging from apparent oblivion to ask cogent questions of the unsuspecting speaker. Grand Rounds is also a watering hole and we physicians are its wild beasts. Grand Rounds has evolved to be more scientific, with a greater focus on results from randomized clinical trials. As Science and Medicine have consummated their marriage, Grand Rounds more often features the application of basic science to Medicine, and vice versa. This translational science can be challenging to present without losing the audience but when a master of the art guides the journey from bench to bedside, such talks are inspirational. I have no concern about this evolution of Grand Rounds. Dr. Lawrence Altman published an excellent piece about the changes in Medical Grand Rounds in the New York Times in 2006. This article focuses on the change in style of Rounds, from the Socratic method with patients on display at the front of the room to a didactic style with PowerPoint. It is easy to understand the appeal of the historical model for Grand Rounds. It was compelling and practical and entirely captivating see the painting below of the first use of anesthesia during a surgery to remove a neck mass in the Ether Dome at Massachusetts General Hospital. The patient reported no pain, the audience looked on in rapt attention and the media subsequently praised the event. This is the kind of GRAND Rounds we would all like to host (admittedly it was Surgical not Medical…but you get the point).

Great job at Rounds today and obviously word is getting out - best Faculty attendance I've seen at MGR in a long while for a non-visiting Professor! Let's keep up the enthusiasm DOM! AKE

Great points and appreciate the acknowlegement of the interprofessional team.....it may be beneficial to create a transparent method of communicating the rounds and new times to attract the other team members. thanks!

Thanks Anne... I think the…

Thanks Anne... I think the faculty are re-energized and recognize attendance as both a pleasure and a part of good citizenship. It was a true pleasure to see Etherington auditorium largely full. Mala and I ail be working to make rounds interesting to other Departments and Nursing and hopefully we will be "standing room only"

Thanks Mae. Any suggestions…

Thanks Mae. Any suggestions for best way of disseminating Rounds topics and times to colleagues in other disciplines would be appreciated-Please et Jenn Valberg in my office know

I love the early hour for…

I love the early hour for Medical Grand Rounds. Because of that alone, I've already attended twice as many as last year. Unfortunately, my attendance at Oncology Grand Rounds will suffer.

Thanks for the feedback Ray…

Thanks for the feedback Ray. Elizabeth Eisenhauer and I have discussed this and there are not a lot of options for alternative days for wither Dept. We both think that quarterly joint rounds might be helpful. I of course believe we can settle this scientifically...attendance based on which rounds has the best coffee.

Stephen I have faced similar…

Stephen I have faced similar issues here in Ottawa. One big problem is that the docs think the material presented at grand rounds isnt pertinent to their practice. This comes with the age of niche medicine and super specialization. Personally i disagree and i belive that broad learning can only you make a better doctor and makes you better able to understand and relate to your colleagues. This is the value we need to instill. A final reason is the value we get from being a Department. If one believes in collaboration and team work and that the collective can be stronger than the individual (ie divisions) that is another reason to have Departmental Rounds.

Very thoughtful commentary, Dr. Archer. Thanks for your leadership in getting grand rounds back on the rails!